Fastaval would not exist were it not for the many organizers who year after year voluntarily works hard to create the best Congress.

Below is an overview of Fastaval’s organizational structure.

Fastaval is organized by the association ALEA, which works closely with the main organizers and the various organizational areas each year. 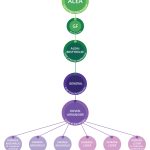 Fastaval serves as a great machine, consisting of many different organizer areas. Each area has one or more main organizers with a number of organizers. Below you can see the many areas that work together to create Fastaval. 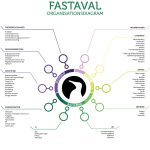 Do you want to join?

Without organizers and volunteers there is no Fastaval. If you want to join us, we would love to hear from you.

Either way, send us an email at fastaval@fastaval.dk! Then we talk about how you can help what you want and how it fits into Fastaval.

Fastaval’s main organizers are a paramount part of the creation of each Fastaval.

They act as coordinators for all Fastaval’s organizer groups and make practical decisions about price and location, but are also visionary on behalf of the future of the congress.

The main organizers are spearheaded by the General(s) who choose all the additional members of the bunker. The General(s) is appointed by Alea's board and the board is appointed by the general assembly. Usually, the group is fully formed just before or shortly after Fastaval and it has become a tradition that the General is announced Sunday at Fastaval.

Do you want to know who is in this year's main organizer group? Read about them here.

ALEA is the association behind Fastaval, and it is the purpose of the association to organize the best Fastaval possible. Many of you don’t know this, but ALEA plays a huge part in orchestrating and conducting Fastaval year after year. The main organizers are only focusing on the annually reoccurring Fastaval whereas ALEA has long-sighted plans and constantly works to preserve the Con for the future.

Each year the General Assembly is held. You can read more about ALEA, and who are elected here.

Why be a part of ALEA?

When you sign up for Fastaval you also have the opportunity to enlist in ALEA. If you choose to do it you will get a discount on your Fastaval-ticket, but besides the discount, you are also supporting Fastaval and ALEA’s work towards the future. The more members ALEA has, the greater effect it can have on the impact of collaboration with the local authorities and other external players. If you become a member of ALEA you are contributing toward a better Fastaval.

ALEA and the National Association ‘Bifrost’

The National Association ‘Bifrost’ gathers roleplaying associations from across the country to create cohesion and a united front for interactive and creative expressions such as Role Play. ‘Bifrost’ contributes a ton of support for its membership associations in the form of help to navigate the laws of the local authorities, economic management, or the loan of equipment amongst other things. But the absolute biggest function of ‘Bifrost’ is to dedicate its resources to lobbying to put our combined hobby on the map.

Furthermore ‘Bifrost’ is administrating thousands of funding capacities through the Bifrost Sovereignty for membership associations such as ALEA.

You can read more about the national association Bifrost here.

How do I enlist?

You can enlist for ALEA through the sign-up for Fastaval. It costs 75,- DKK per year. ALEAs’ members will get a discount on the ticket for Fastaval.

If you wish to enlist in ALEA without signing up for Fastaval then you can send an email to ALEA on alea@fastaval.dk.

Sometimes things don’t begin. They just happen. And afterward, it’s easy to look back and say: THAT’S where it happened. (But) that’s how the first Fastaval happened a long time ago. Not like a vision that just emerged from a single mind. But more like a random chain of events that arose from a naïve love for (board)games. The year was 1986. The (mood/ambiance/atmosphere) wasn’t what you could hope for. Come January the American space shuttle Challenger exploded – the largest and most tragic disaster for the United States space program ever. In February the Prime Minister of Sweden, Olof Palme, got shot down in Stockholm – the closest that Scandinavia has come to the Kennedy assassination. And in March 150 game enthusiasts gathered for a weekend of games in Aarhus.

And how DID it start? At the beginning of the 1980s role-playing was something not many had heard of in Denmark. A few had tried it on a stay in the U.S.A. or Great Britain. Others picked up a rulebook for Dungeons & Dragons or Call of Cthulhu in some obscure shops. A slip of paper hung up in the Yellow Kid comic book shop in Aarhus led to a meeting at the university where around 20 people, mostly between 16 and 22, showed up.

Indeed, there was a common ground for creating a club. A summoning for a founding meeting was issued a couple of months later in March 1985. 26 people showed up – and it was at this time that Mads Lunau pulled the name “Fasta” out from a hat as an anagram for Fantasy-Strategy-Tactic. The support was hesitant: 14 out of 26 voted in favor of the name. However, he almost unanimously got elected as Chairman. In April of 1985 the five board members, led by Mads and two substitutes – Malik Hyltoft and Adam Hannestad – were in Malik's dormitory room at Aarhus Universitet/University. One of the most important items on the list was how to dramatically increase the memberships so the municipality would give financial support to the club. Without it, they couldn’t afford to rent facilities. Today no one can exactly recall who got the idea of convening for a large game day in May 1985. Probably Mads or Malik. Back then most of the great ideas came from those two, who knew each other from their high school congress where they went head to head, respectively, as an ardent left-wing man and a communist and got unlikely respect for one another. Posters were written on typewriters, photocopied, and hung around in suitable venues in Aarhus – on institutes of the university, some high schools, and comic book shops. The naming creativity was already extinguished with the name ’Fasta’ so the summoning got the headline “Games Day”. Later, much later, the day got to be remembered on the inside as Fastaval 0.

150 participants at the first Fastaval

No one can with certainty remember the attendance for the first Fastaval, which wasn’t called Fastaval, but it wasn’t more than 50 people and hardly more than 40 in total. The Game Day was to be repeated in 1986, and in January the first invitations were distributed for what was called ‘The 1. International Festival in Aarhus on the 7th to the 9th of March. The invitation addressed ’all board players, roleplayers, and other oddballs. The process was so chaotic that the rooms hadn’t been selected at the time. Only after, just a few weeks before opening were they able to book Skt. Anna Gades School in Frederiksbjerg, which is an area of Aarhus. Each day they had to close up at no later than 10 pm., so the Fasta members offered accommodations for the guests, especially those from Odense and Copenhagen. The decision to cook food in Adam Hannestads’ adjacent apartment was decided a few days before, because it appeared that, on the pre-registrations, people would be hungry. There wasn’t any theme – just a series of board games such as Car Wars, Risk, Diplomacy, Conquistadors, and Third Reich and some roleplays: Marvel and the upcoming such as Call and AD&D. The people from the roleplay group in Odense delivered the Call-scenario – The Monastery in the Mountains – and paved the reason for a long tradition of the 2 clubs working in unison for the congress and hosted guest scenarios for each other.

Focus On the Role Play Scenario

When the cleaning was done after the first “real” Fastaval in 1986 with 150 participants, one thing was certain: this had to be done the next year. And the feedback was positive on the role-playing part: it was at this Con that the foundation of Aarhus – in contrast to the gaming clubs in Copenhagen and Odense – had its primary focus on role play in the form of written scenarios. After its first wobbly and shaking steps at the end of the 1980’s Fastaval quickly grew into a large and well-organized Con. In the early 1990’s it proved to be tough to manipulate people into writing scenarios for Fastaval, and plenty of threats and pressure were involved to get people to write scenarios. And it proved even harder for people to submit them.

It quickly became obvious for the organizers that something had to be done to make it engaging to write scenarios, and in 1992 the prize, ‘The Otto’ was introduced at Fastaval. However, the prize didn’t go to the participant, but to the writers at Fastaval, who got acknowledged at the first-ever banquet.

The Otto created a large kerfuffle in the role-playing environment because it was both transgressive and provocative in a hobby that focused on no one being better than others, that you picked a winner and pointed at ONE scenario which was the best of them all.

The Otto had its effect, and in the following years it got easier and easier to get people to sign up to write a scenario – and if the writers wanted to compete for the coveted and one-of-a-kind golden penguin, they had to turn in their scenario well before the deadline so the judges could read them – and that’s how The Otto solved both the issue of attracting scenario writers and make them turn it in before the Con.

Today, however, the issue isn’t to get people to write a scenario – it’s choosing between the synopsis' that get handed in, and The Otto was the catalyst for the entire writer’s culture that made Fastaval the leading figure in the world when it comes to high quality-level scenarios.

A Con in Constant Movement

A lot of things have changed at Fastaval since the beginning of 1986. Fastaval is a fluid Con where nothing is set in stone. In all of its years, Fastaval has been what the organizers have made it into, and there’s a constant replacement of organizers who each have their visions and ideas.

The starting point for around 900 to congregate at a school or high school during Easter is the same today as it was in 1986. Original role play and board games that have been written and designed for Fastaval are played, and the participants play a variety of other games as well.

It’s possible to show up at Fastaval on Wednesday and leave after the Otto Celebration on Monday without having to interact with the real world if you wish. Sleepovers are possible at Fastaval, and you can even sign up for breakfast and dinner, and a variety of food can be purchased at different locations at the Con.

When the participants don’t role play, play board games, or other types of games they can get cozy and socialize at the Con where there’s a quaint board game inn, a café with cocktails and drinks, and a bar where you can enjoy a cold brew.

Fastaval has in many ways evolved since the first Con in 1986, but the turning point is, and always will be, to be together with others who cherish other types of games as you.